You’d start to think that Off-Shore Cameron had been caught with his pants down over the flooding. He discovers he’s appointed a half-wit with Pointless Paterson and that this partner is the FibDem Useless Eustice. How the hell did that happen?

Off-Shore gets all ‘eggy’ in the House of Common-as-Muck during Not Answering Time and realises he needs to do something. He knows that the sticky brown stuff, that the people in Somerset are having to walk around in, is about to hit the fan and could really kick him in the crutch come MEP voting time.

So what has Off-Shore been doing? Hiding up in that there London and claiming to have COBRA Force meetings. Rumour has it that COBRA Force is just his bloody Bridge Club in Downing Street.

Time to call up Pickles! The idea of Pickles coming to rescue of anything other than the last biscuit is a bit far fetched but, when you look around, that is all Off-Shore has!

So while the poor people, just up the road from us, in Somerset are having to bail-out their houses, Pickles is dragged out to bail-out the Coalition. Anyone remember Nick Clegg? What does that bloke do for our money?? 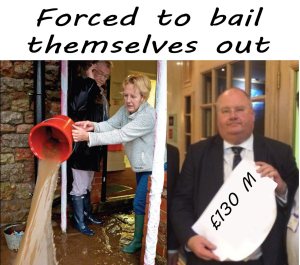