Just as all the so-called plans that Tess has for Brexit all gather like a dark cloud a couple come to the rescue. Just as she was thinking her Conference was going to turn into a backstabber’s convention along come Bill and Kate with the news she wanted to hear.

What is more guaranteed to make sure the red-tops all forget about all the cak that is going on in the country? You’ve got it – a royal baby! Yes, yet another taxpayer grabbing mouth for us to feed and for the tabloids to get their teeth into.

Yes, the Tories have managed to persuade Kate to push out yet another one, with the promise of a rise in the civil list no doubt, so as the attention of us plebs is moved away from the likes of the failings of Davis, Fox and Johnson. Nice touch.

All that butt-kisser Nicholas Witchell, of the BBC, was worried about was that they might miss out on a foreign holiday this autumn as Kate has been feeling ill of a morning. Makes our bloody toes curl! 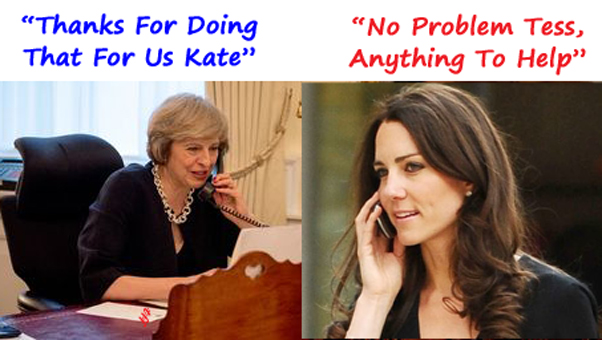