Heaton-Harris Insists He Was ‘Working Alone’ On McCarthyite Inquiry

On the face of it the letter seemed to make a simple request until thought was given to the motivation behind it. Just why did Tory MP and Eurosceptic, Chris Heaton-Harris, want to know the names of university professors teaching Brexit? Why did he also want to know the content of each course? Why wasn’t he interested in any other courses?

It soon started to look like he was compiling a ‘hit list’ with ‘sinister’ overtones and a whiff of ‘McCarthyism’ about it.

The University of Worcester’s vice chancellor, Professor David Green, was certainly not happy with the request from the Tory MP. He said: “When I read this extraordinary letter on Parliamentary paper from a serving MP, I felt a chill down my spine.

“Was this the beginnings of a very British McCarthyism?”

He went on to say Mr Heaton-Harris’ original request, which “appears so innocent”, was actually “so dangerous”.

“Here is the first step to the thought police, the political censor and Newspeak, naturally justified as ‘the will of the British people’, another phrase to be found on Mr Heaton-Harris’s website.

“Then I thought that only one response was appropriate, which Churchill spoke so brilliantly for all who love Britain and democracy when he said ‘we shall outlive the power of tyranny’ and ‘we shall never surrender’.

“That is my reply to Mr Heaton-Harris MP’s sinister letter.”

As you would imagine Number 10 and the rest of the Tories are backing away at a rate of knots and declaring no knowledge of what Heaton-Harris was up to. Such loyalty! 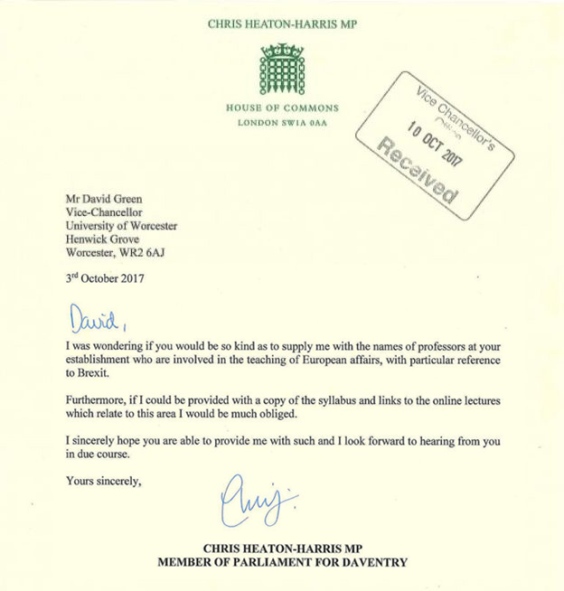